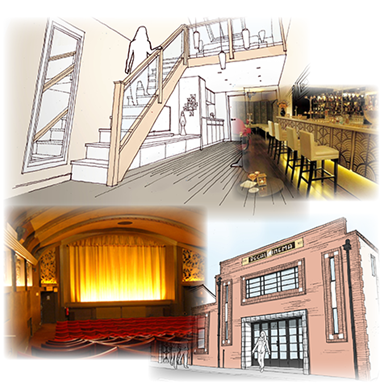 Our Regal Cinema refurbishment project opened for its first screening on Friday 30 June.  Located on Shaftesbury Street in the centre of Fordingbridge, the cinema has been sympathetically restored in an Art Deco style by our sister company Corintech.  Intended as a way to give back to the community, the new cinema has 30 seats and will screen classics as well as modern films, and it is hoped there will be Saturday morning screenings for children too.

The cinema first opened in 1933 but closed in 1965 and subsequently became a pottery business.  Before being bought by Corintech, the site had been vacant for four years.  Brian Currie, the owner of Corintech and Lascar, commented, “I just had the idea of making it into a small cinema that will be sustainable.  I wanted it to benefit the community."  The cinema will be run by the Fordingbridge Regal Cinema Club, with volunteers helping out with the day to day running and the community being invited to become members.  The refurbished complex also includes apartments to allow Corintech and Lascar to provide subsidised accommodation for their new graduate recruits.

Casablanca was chosen as the film for the opening night screening, and the event was covered on TV by BBC South Today, as well as receiving written coverage on the BBC Hampshire & Isle of Wight and Bournemouth Echo websites.