The best thing about the iPhone is that it isn’t just a phone - it’s a myriad of devices all in one box. This type of ‘device convergence’ is happening all around us and as we are becoming more familiar with it, we can’t help but expect it - even in the industrial equipment space. In this article, we will explore the advantages and disadvantages of converged devices for industrial applications and give advice on what specifiers should be looking for.

The importance of device convergence

In today’s world it is all about being concise, efficient and both cost- and time-effective. Instruments such as those used for monitoring, control interfaces and recording capabilities can now all be found in a single device. These individual devices combine hardware and software that work together to provide a range of functionalities. More importantly, further functions can be added easily, quickly and cheaply by simply installing programs and apps that have already been designed to be supported by the existing software and hardware.

This is a major shift from traditional instrument specification whereby purchasers tended to buy dedicated devices because they need a component that performs a very specific task, rather than paying for functionality they don’t necessarily need right now.

This is one of the biggest changes in mindset introduced by converged devices. The argument for the traditional approach is why buy a colour touchscreen display with several analogue inputs, digital I/Os and PWM outputs designed to cover a wide variety of industrial applications when you don’t need all those interfaces, in fact maybe you only need just one of them right now?

Another common concern is that a dedicated machine might be better at doing a particular job, and that the form factor of converged devices can lead to a compromise in performance compared to dedicated devices. It’s the difference between an iPhone and a DSLR camera, and there is often a perception that converged devices are more likely to be ‘jack of all trades, master of none’.

While there may have been an element of truth to these issues in the past the fact is that today’s technology makes these concerns less and less valid. The success story of the iPhone epitomises the overall benefits of convergence and it is just another example of how consumer-based products and technology has already started to influence and drive the industrial sector. Converged devices now offer significant advantages not only in terms of the flexibility they offer specifiers, but also by future-proofing the investment. 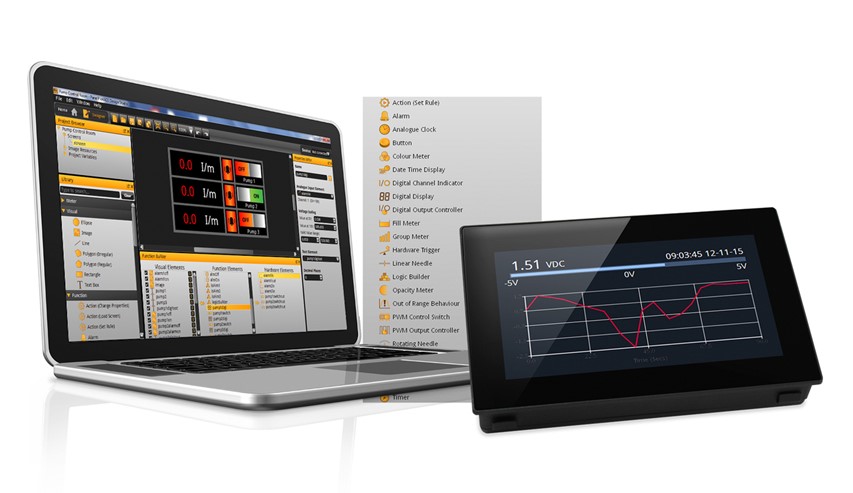 The key benefits of device convergence

Aside from the overall functionality benefits of device convergence, cost is probably the most obvious benefit of convergence, as you don’t have to pay for two separate sets of hardware. To take the example of the iPhone again, the main microprocessor handles most of the camera functionality on the device, and this is also true in the industrial sector as extra functionality doesn’t need to mean additional cost, in fact it could mean significant savings. For example, purchasing a fully functioned HMI display and PLC as standalone units would could easily cost £1000, whereas a converged device that combines the functionality could be bought for a couple of hundred pounds.

Moreover, the fact that the converged device will probably have a range of inputs and outputs it means that if your requirements change further down the line then the up front investment is not wasted. Rather than ripping and replacing with a whole new set of components, new functions and inputs can be easily added to the core, and therefore most expensive, component.

The second key benefit is the reduced space requirements and size specifications of converged devices. A small control room may not have space to add both a controller and a display and a single device will always take up less space compared to two or three. Chip technology has gotten faster and smaller and because of this, it is now possible to get more processing power into a smaller space. Today, devices such as the PanelPilotACE is essentially a HMI display with a controller so it is not necessary to purchase two separate modules. For specifiers that have specific space constraints this is extremely advantageous and opens up options and possibilities that weren’t available before.

Finally, there is the benefit of smooth integration when you have the controller and display in a single device. With separate devices there is automatically more engineering work required to link them together, even if they are made by the same supplier. However, with converged devices this work has already been done – in an iPhone the camera already talks to the display. The integration between the camera and the display minimises the users’ time in specifying these connections because they are already speaking to each other, Apple has done that work for the user. In the case of the PanelPilotACE, the hardware routines are already tied into the display through the software and almost invisible to the end user so they don’t need to worry about the programming.

The future of device convergence

We have discussed how the iPhone is a great example of device convergence and one of the main reasons that makes it so is because the hardware and software are developed by the same people. During his time at Apple, Steve Jobs quoted Alan Kay: "People who are really serious about software should make their own hardware”. As more and more manufacturers adopt this approach in the industrial sector, we can expect converged devices to become more common.

Furthermore, as the power of mobile computing processing increases giving you more for the same price, the advantages of device convergence will become even more compelling. You now have a device that has the potential to perform more functions than what it was originally designed for and all manufacturers need to do is develop the software to turn those functions into a reality based on industrial needs, trends and demands.