Conditions that Cause Mould Growth

It can take as little as four weeks for mould to grow to a damaging extent on a surface that was previously clean, dry and unblemished. Given that mould can cause health problems as well as structural damage it’s important to understand the conditions that cause mould growth, so that they can be avoided. This is a particular concern for the owners of buildings, caravans, boats and outbuildings, especially those left unoccupied or unheated for any period of time. 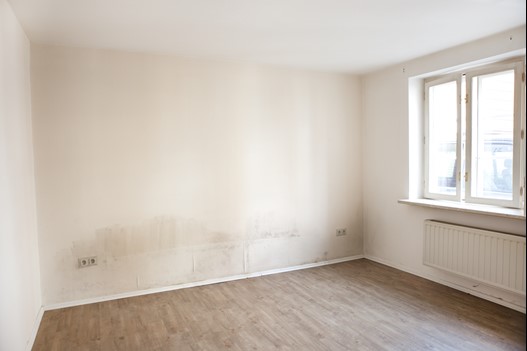 The Effects of Mould

It’s well known that mould will quickly spoil soft furnishings, fabrics, leather and similar materials. But it can also cause structural damage to buildings, weakening walls and floors and causing leaks. This can include not just organic materials like wood, but also damage to brickwork, plaster and concrete.

Even more importantly, mould can cause serious health problems for people living and working in affected areas. It can aggravate asthma and other respiratory ailments, cause coughing, rashes and eye complaints and some moulds are even directly toxic through their spores. The presence of mould is also frequently linked to Sick Building Syndrome.

Mould requires four things to grow: nutrients, moisture, an acceptable temperature range, and time. It can use most organic materials as a food source, including house dust, and so cleanliness is an important factor. However it is a combination of moisture and temperature that most frequently creates the conditions for mould to flourish.

Rooms and buildings that are airtight or have poor ventilation often experience high rates of mould growth because moisture is trapped within them. Conversely, if there is too much airflow from outside, moisture can be drawn into the space and again growth occurs. It’s therefore necessary that balanced ventilation is provided. Keeping humidity levels low can also discourage pests such as dust mites and cockroaches. 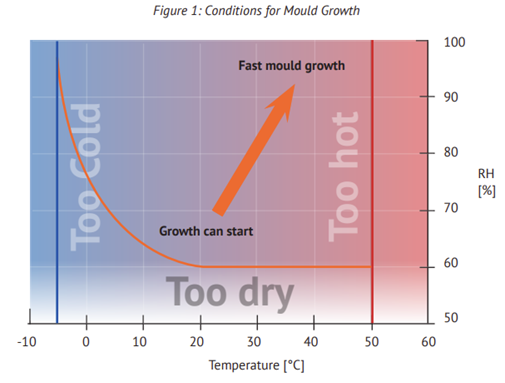 As already noted, mould can grow on almost any material, but it will grow much faster on some materials than others. Fast growth will normally happen on organic surfaces, but if nutrients are available mould can grow slowly even on glass and metal.

Modern Cloud-based monitoring systems are an inexpensive way to continuously monitor a single location, or multiple buildings or areas within a building. As well as providing up to date readings, long-term and seasonal data trends can be viewed and analysed. When condensation occurs the sudden spike in moisture can trigger mould growth.

For this reason the monitoring system should also measure the dew point, which is the combination of temperature and humidity at which condensation starts. A good system will also provide live notifications whenever pre-set measurement levels are reached.

For mould growth the most critical parameter is humidity, and it’s recommended that this alarm level should be set to 60% so that the building can be checked as soon as atmospheric moisture reaches this point.

Extent of Moisture and Mould Damage in Structures of Public Buildings Available at: https://www.sciencedirect.com/science/article/pii/S2214509516300833 VTT