Changing weather conditions can cause problems for fruit producers and home-brewers of beers, lagers and wine.

When starting a brew day to make wine, several aspects need to be considered, however, with the slightest change potentially ruining a brew, temperature control is crucial to the bre 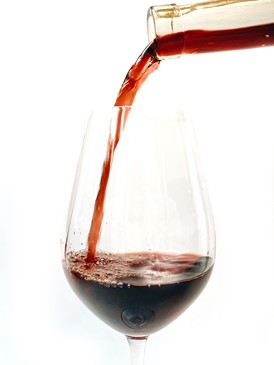 wing process. External temperature extremes can cause problems during fermentation, this is where temperature monitoring is vital, Lascar’s cost-effective and reliable EL-WiFi-TC temperature data logger with external probe solves these problems.

The Challenge
Peter Barrett, from the South East of England, started brewing beer and lager as a hobby back in the 1970s. A keen home-brewer, Peter has expanded his brewing capabilities making wine from the fruit in his garden.

“I guess brewing from kits is the easiest as everything is supplied except sugar and water. However, I like trying new things all the time and we had a bumper crop of Blackberries this year, so that’s what I’m brewing next.”

The best time to brew is during the winter months as there is fewer spoilage bacteria and wild yeast to contend with, however, yeast can exhibit stress problems without sufficient temperature control during fermentation. For a home-brewer, this can impede activation, especially when temperatures get down below 70°F, the wine yeast will start to go dormant, known as a stuck fermentation. For most wine fermentations to succeed, the temperature range needs to be between 70° - 75°F.

During warmer weather, the biggest problem is the off flavours from esters and fusel alcohols that the yeast produce. The yeast can start consuming but run out of nutrients before finishing the sugar, giving an incomplete fermentation. Yeast can also become too sensitive to alcohol toxicity and can die off before the usual tolerance is met. Similarly, yeast can die off from heat stress, resulting in under-pitching and off flavours. If the fermentation liquid rises over 75°F, then the wine yeast can start to produce off-flavours and aromas, which can create a wine with an impure taste. If the fermentation becomes overly heated, this can encourage bacterial growth and the production of unwanted enzymes in the wine, making it taste off, fruity or solvent, which is irreversible, and therefore must be controlled. 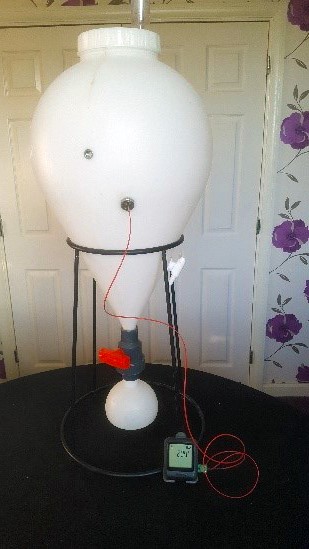 The Solution
Peter’s original thermometer required constant checking, so he searched for an easier and more reliable method of temperature monitoring.

A separate thermowell with temperature probe is recommended to measure the fermenting mix/liquid. A thermowell is a cylindrical fitting used to protect temperature sensors installed in industrial processes. This acts as a barrier between the liquid inside, keeping this separate from the outside air and any contamination which could spoil the brew.

In appearance, a thermowell consists of a tube closed at one end and mounted in the process stream. The thermometer probe is inserted in the open end of the tube, which is usually in the open air outside the process piping or vessel and any thermal insulation. Thermodynamically, the process fluid transfers heat to the thermowell wall, which in turn, transfers heat to the sensor. This is much more accurate than Peter’s previous gauge.

“Giving you confidence that the temperature is not drifting away from the ideal fermenting temperature.”

This WiFi-enabled data logger from EasyLog is easy to set up and remotely and continuously monitors Peter’s brew using a temperature probe, measuring temperatures between 0 to 200°C (32 to 392°F), automatically uploading data to the EasyLog Cloud.

With access to his data at any time in the EasyLog Cloud, Peter can monitor his device from anywhere using a PC, laptop or mobile phone. He can also change his data logger settings remotely, setting up and receiving email alerts of alarm conditions and can assign multiple user privileges.

His device will store data internally if it loses a WiFi connection and automatically uploads it to the Cloud once reconnected so data is never lost.

The Benefits
Once Peter had received the EL-WiFi-TC Temperature Data Logger and probe, he could simply manage and download the data in a report form as and when he required it.

Peter is now reassured that he can brew all year round with a monitor advising if the temperature of the mix during fermentation is getting too hot or too cold. He also receives notifications from his data logger to advise if any action is required so the brew will neither be lost nor tainted in any way.

“The EL-WiFi-TC is just what I need. Different brews, beer, lager, cider and wine can have different optimal fermentation temperatures and with this logger, you can easily set the maximum /minimum temperature alarms on your phone via the EasyLog App.”