Fishbourne Roman Palace is set in the village of Fishbourne, Chichester in West Sussex. The largest known Roman home in Northern Europe, it was constructed in the 1st century AD, around thirty years after the Roman conquest of Britain. In order to reach the Arts Council England Accreditation standard Fishbourne must be able to demonstrate clearly that they are taking the steps to conserve the palace for future generations.

The two main areas that Fishbourne’s conservation efforts are directed towards are:

For the past 15 years, Fishbourne has used a wireless system to monitor temperature and humidity. This system was becoming increasingly outdated and the software that was needed to maintain the system was no longer supported. As well as this, the individual sensors were expensive and difficult to replace, and with budget limitations this meant that some areas were not monitored to the best standard possible.

Fishbourne Roman Palace’s “Friends” organisation invested in five EL-WiFi-TH+ sensors and began to deploy them in key areas of the museum. Loggers were placed in cabinets and display cases, as well as in hard to reach places. Easylog sensors provided Fishbourne with consistent, continual monitoring of the temperature and humidity of important features and artefacts. The loggers captured data every 15 minutes, on a 24/7 basis, providing the museum with an on demand comprehensive view of temperature and humidity across the site, even outside of working hours. Importantly the Easylog Cloud remote monitoring system provides automated alerts whenever it is detected that the temperature is going out of range. These alerts can be sent, via text or email, to multiple people so that they can be responded to within seconds – making the maintenance of temperature ranges within display units far more effective. 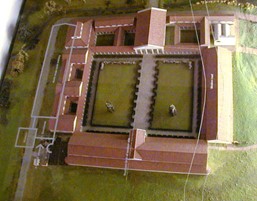 First and foremost the museum benefited from the price of the sensors, which were much cheaper than previous systems. This meant that the museum was able to afford to buy more sensors, so that much more of the site could be monitored. As well as this, the ease of scaling sensor numbers up or down, depending on the needs of the museum, without a major system overhaul was hugely appreciated. Finally, Easylog sensors are wireless and send data directly to the Cloud, presenting data in a clear, professional way. This not only saves on manpower and time-cost, allowing staff to spend time on other tasks, but is also hugely important to the longevity of the museum’s exhibits. Staff no longer need to regularly open the cabinets to take readings. This helps better protect and conserve the artefacts, as there are no sudden changes in temperature or humidity whilst data is being collected.

“Traditional museum solutions are notoriously expensive, so it was a breath of fresh air to find Easylog wireless sensors, which are perfect for what we are trying to monitor here at Fishbourne. We are extremely happy with the results so far and hope to expand the use of the Easylog system within the museum.” Dr Robert Symmons, Curator at Fishbourne Roman Palace