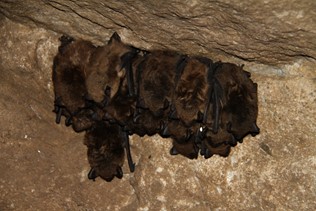 Since it was first reported near Albany, NY during the winter hibernation period of 2005-6, White-nose syndrome or WNS, caused by a cold loving fungus, has decimated North American bat populations that hibernate during the winter. Killing over 7 million bats in under 10 years, the rapid expansion of WNS to over 22 States and the alarmingly high bat mortality it causes in affected caves has caused global concern - not only for the future of bat species susceptible to this disease but the eco- disaster that could follow such a reduction in their numbers and surge in numbers of the insects they eat.

As a result, a multi-faceted, collaborative effort is underway by biologists US-wide to scientifically investigate all aspects of the WNS puzzle - disease detection, transmission, species sensitivities, disease pathogenesis, species survivability, and ecosystem impacts amongst many others. But part of the challenge facing scientists is that hibernation survival criteria for bats is still relatively unknown, including their reliance on micro-climates that are very difficult to detect.

One of the studies on this critical situation is underway as a collaborative effort between BATS Research Center in Shohola, PA and the NJ Division of Fish, Game and Wildlife, Nongame and Endangered Species Program. The main study area is the largest known hibernacula in New Jersey - the abandoned Hibernia Mine in Rockaway Township. The mine has a 2300 foot tunnel, which provides exceptional micro-habitats for hibernating bats. In the late 1960’s, the mine wintered over 100,000 bats of several species. In the early 1970’s, after the landowner and state closed all the vertical shafts, the numbers declined to approximately 30,000. When WNS arrived, the bat population plummeted to 1,750 the first year and is now around 500 individuals – an almost 95% mortality rate.

The research team, led by John Gumbs of the BATS Research Center and Mick Valent, the Senior Biologist at the NJ Division of Fish, Game and Wildlife, Nongame and Endangered Species Program, is attempting to monitor and measure the micro-climates through temperature and humidity measurements in the mine to see how it affects the hibernation patterns of the bats.

However, detailed monitoring of these patterns is difficult as human activity in the mine disturbs the bats. 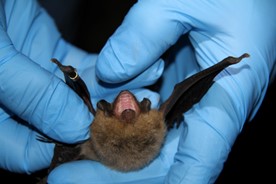 To assist in the monitoring operation and knowing human presence was a major issue, the team identified Lascar’s EL-USB-2 data loggers; temperature and humidity sensors small enough for easy installation at each survey point in the mine (enabling the team to cover the entire length of the tunnel), battery operated so they could be left for months to log independently, and easy to extract data from, via USB connectivity, once the study was completed. John Gumbs explains: “The Lascar data loggers have provided us with a much better picture of the changing mine  environment by enabling us to “map” the changes we were only guessing were occurring. The data loggers are small and lightweight which makes installing them easy and with a few minor modifications (installing an umbrella over the logger and modifying the mounting) have provided us with a section-by-section profile of the mine environment.”

Collectively these data loggers are helping the scientists better understand changes in airflow, temperature and humidity that the bats require to survive. In the winter of 2013 the team collected the first set of climate data for the mine.

Gumbs continued: “Our project is a complex, multiple year project. However, just from the first batch of data collected with the Lascar devices we can already start to see how the movement of the bats from location to location (micro-climate to micro-climate) during their hibernation period seems to be part of a survival strategy and how it may be a result of the WNS disease progression. We will be returning to the mine during the winter of 2014 to gather a second data set - enabling a first comparison to be made, helping the team to start answering some of the vital questions facing biologists about the decline in bat populations across the US.”

While the study continues, and given the success the team has had in using Lascar’s loggers, there is significant potential for the study in New Jersey to be adopted as ‘best practice’ by researchers across the US. While this remains good news for Lascar, more significantly similar studies replicated across the US will arm biologists with far more accurate monitoring of multiple bat populations and hibernation patterns. These significant insights into what is causing this major ecological crisis will in ti me, it is hoped, help in the development of potential solutions. For the bat population of the US and Canada, solutions can’t come fast enough.