“Groups of cavers are a little like motorcycle clubs. When they discover they share a strong interest in that one thing, they go for a ride together,” says Tim Frederickson, part of the Fort Stanton Cave Study Group (FSCSG). He explains that many people from early childhood have a steady fascination with caves and often find themselves pursuing that interest as a hobby. Such is the case for the numerous volunteers in the FSCSG who have joined together to study the scientific mysteries of one of the largest continuous cave formations on the planet. 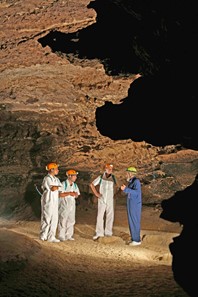 Located in New Mexico on Bureau of Land Management property, Fort Stanton Cave has been the subject of exploration for hundreds of years. The recent discovery of the Snowy River Passage demonstrates that the cave extends much farther than originally thought, and it raises new questions for research. An ancient river shaped the passage, but although it was dry when first discovered, returning cavers found water flowing from bank to bank just a few years later. FSCSG then began to research the water flow in an effort to learn more about the source of the river that formed the cave. Pete Lindsley, one of the volunteer leaders of FSCSG, explains, “Because New Mexico is such a dry state, the work we are doing in Fort Stanton Cave is extremely important to better understand this valuable resource.”

When the FSCSG investigates something new, they turn to Tim for their technology. “They tell me what they want to measure, and I find an easy way to do it,” he says. “I’m really the technical cheer leader for these guys – they’re the scientists, I’m the one who researches solutions for their needs.” So when they discovered the “dry” Snowy River with flowing water in the summer of 2008, they asked Tim to find a quick solution to monitor the water flow.

“I knew I was looking for something to log data,” Tim explains, “and I also knew that there were a lot of factors that would make finding something workable very difficult. How do you power something underground that has to take readings over several months or even years? We needed to set up technology in an environment that would have no external power source, up to one hundred percent humidity, and could take an experienced caver as many as twelve hours to reach. We wanted to place the prototype sensor about two hours from the entrance, but in 2009 we hope to install additional units more than eight hours from the entrance.” He had to look for something easy to carry through small dark passages and able to collect and store the necessary data. “We also had to worry about not destroying parts of the cave,” says Tim. “We basically needed something to do good science but not cross contaminate the area – something that would survive but be small enough to contribute the least amount of toxic material if it washed away."

Tim knew he found the right match when he came across Lascar Electronics’ website. “I looked around at all kinds of different things until I found this logger. It was exactly what we needed.” The EL-USB-3 is Lascar’s voltage USB data logger, a small unit that features a pair of screw terminals and is supplied with a set of measurement leads terminating in crocodile clips. Tim decided to connect these to a small sensor that could measure the depth of the water in the Snowy River Passage. “We rigged the data logger up to a sensor that sits in the water and measures the resistance with a voltage source, so it measures and records the voltage drop once every half hour,” explains Tim. There would be no easy way for cavers to lug big equipment to the desired location, so the logger’s size and simplicity was crucial for FSCSG. “The cavers hike and crawl down into the cave with just a hardhat light plus several spare light sources to offset the pitch black, and with Lascar’s logger, all they have to do is carry it in their pack and plug it in to the cap already hooked up at the sensor rig. This logger is easy for our cave team to install.” 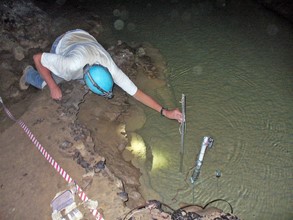 The EL-USB-3 is not only ideal in size and method. It also provides a solution for future requirements of FSCSG. “It’s small, it has a battery that will last a year in a cave, and we may also be able to use it when we want to measure other things like temperature, humidity, wind velocity and direction, barometric pressure, water chemistry or air chemistry,” Tim says. “This turned out to be such a perfect fit that it will be easier to do a format conversion for those other measurements than it would be to find another kind of logger.”

Exploring the science of a cave can be an expensive undertaking. The FSCSG is not an institution funded by the government, so Tim was happy to find that Lascar’s loggers are available at such a low cost. “Nothing else in the market fits this price range,” he says. Tim already purchased several voltage loggers out of pocket, but because of the price he is able to consider other loggers in the Lascar line. “We want to get a few temperature and humidity loggers as well – it will be important to measure those parameters because we need to know if the temperature or humidity fluctuates from the air flow in various passages.”

FSCSG has been very happy with their use of Lascar’s voltage logger. The ease of data retrieval has allowed the speleologists to download the first two months of raw data from the prototype sensor and program the unit to run for another year. The data shows some interesting phenomenas and the scientists are now starting to review it. The water in the Snow River Passage is clean and unusual in the dry state of New Mexico, and FSCSG has had the opportunity to learn more about this very important resource with the EL-USB-3. Tim concludes, “Those loggers are neat little devices. I need to get some more.”